A Competitive Review - What is it 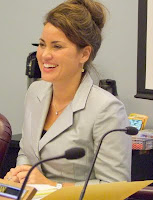 Sen. Lesil McGuire’s SCR 4 (now incorporated into Section 4 of Draft CS SB 85 version E 3-24-11), establishes an Oil and Gas Competitiveness Review (OGCR) Board. The purpose of the Board is to review and provide recommendations to the Legislature each December 1 on steps to encourage on-going long term investment in the development of the state’s oil and gas resources. In many respects, the purpose of the Board is much the same as the Permanent Fund Corporation Board. The PFC Board is designed to oversee and maximize the investment of Alaska’s Permanent Fund. The OGCR Board is designed to monitor and offer recommendations to the Legislature on steps designed to maximize the investment made in Alaska’s oil and gas resources.

The OGCR Board is proposed to be composed of selected Legislators, Commissioners and members of the public. As with a similar effort in Alberta that resulted in restoring oil and gas investment to the Province after a substantial downturn, the purpose of the OGCR Board is to create an ongoing body whose job it is to monitor Alaska’s position in the world oil and gas industry, and provide useful and, most importantly, ongoing insight to the Legislature on that subject. One of the anticipated results would be to lessen Alaska’s dependence on “Outside consultants” to help identify the state’s position in the oil and gas industry, and to significantly increase Alaska’s – and the Legislature’s – home grown ability to provide the same insight.

Senator McGuire spoke at a luncheon on March 30, 2011 about how Alberta reviewed their oil and gas tax policy and its global competitiveness which resulted in their reducing of their oil taxes. Alberta raised their oil taxes the same time Alaska did in 2007, and the industry and jobs flooded out of Alberta. Alberta was able to turn their investment climate around in just a few short years, and Alberta is now booming with capital investment and jobs. Here is the audio from Senator McGuire's comments on March 30th, 2011.

Moving on a competitive review will send a strong signal to the oil industry that Alaska is serious about providing predictability in the state's tax structure, and will provide a positive investment and regulatory climate for the industry to thrive, and where the citizens of Alaska benefit. Alberta's competitive review was completed in six months, and their government was able to act quickly to reduced their taxes which incentivized the industry to return. Resulting in billions of dollars of investment that moved through their entire economy. A competitive review is a long-term solution for Alaska.

Click on "full" on the bottom of each document to view in full screen mode.