Gasline or greed? You be the judge

LIVING BLOG POST:  The board has been updated, and it will be updated as I learn more.  You will also find hyperlinks to articles below the image. 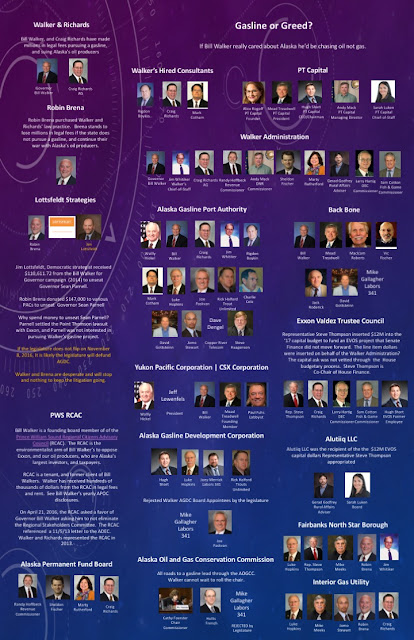 With new governor, a different take on energy development
http://www.eenews.net/stories/1060009668

Gas offers have come in
http://www.interiorgas.com/gas-offers-have-come-in

Yukon Pacific still in the hunt for gas
http://www.petroleumnews.com/pntruncate/169094998.shtml

Posted by Deborah Brollini at 9:12 AM

Walker's shadow government and your PFD; The Brena effect

I normally do not publish donors who give to political campaigns. I usually stick to total donations when it comes to unions, and special interests groups. I respect everyone's vote even though I may not agree with your politics. I believe in democracy, and may the best man or best woman win. However, in Alaska that isn’t always the case.

Money talks, and it isn’t just pay-to-play. It is much darker than even I had suspected. Walker’s shadow government, and his desperation for a pipe dream should give all Alaskans pause.   Brena is a trusted friend of Bill Walker, and he has spent a pretty penny getting him elected Governor.

Robin Brena is also the guy who bought Bill Walker, and former Attorney General Craig Richard's law firm for a $1.00 (Sarcasm, you gotta point that out when you're being sarcastic these days). Bill Walker, Craig Richards, and Robin Brena have spent their legal careers suing Alaska's oil producers which should concern all Alaskans.   Now it turns out Brena dropped $223,300 over the past four years into political campaigns and special interest groups.  $223,300 is a huge chunk of change to get the governor and legislature you want.

I haven't figured out if the agenda is for Governor Walker and Craig Richards to default on Prudhoe Bay leases for a pipe dream (which requires taking your PFD), or to keep the legal billable hours thriving on the backs of Alaskans.    Governor Bill Walker has made millions in legal fees pushing for a pipe dream.  Check out Walker's  2014 APOC financial disclosure report.

Elections have consequences people, and your PFD is not for sale.

Let Brena's APOC report speak for itself. You be the judge. Here is the link to his APOC report https://goo.gl/K0nH0s

Posted by Deborah Brollini at 11:22 AM

The House gaveled out sine die last night, and Alaskans can breathe a sigh of relief knowing that Senate Bill 128, the Governor’s abolishing the PFD legislation is dead. I anticipate the Governor will call the legislature back for a special, special session to introduce a new PFD abolishing bill. I have spoken with my Representative Craig Johnson who is House Rules Chair and he shared with me that all PFD legislation will not get on the House floor. The public has spoken. So, the Governor and his special interest pals need to pack up and go home. It’s over.

The Governor chose to not lead, and cut the budget. Governor Walker has spent the last 18 months “grooming’ Alaskans to take their PFD.  Let us not forget Walker's special interests partners who have spent a year manufacturing a ‘the sky is falling’ sentiment that is scaring Alaskans. I’m sorry, scaring Alaskans is not leadership. Alaska has savings and the sky is not falling.

Cut the budget Governor, and muster up some fiscal responsibility that you promised Alaskans if you got elected. Then, and only then will Alaskans stand shoulder to shoulder with you and approve the using of our PFD wealth.

It is come come to Jesus time, and the question is, will Governor Bill Walker burn Alaska’s house down.

Posted by Deborah Brollini at 11:45 AM

Ron Duncan, GCI President and CEO sure does have his shorts in a twist all in the name of ‘doing what is best for Alaska.’  Seriously?   What Ron Duncan cares about is keeping his corporate welfare.  GCI received $5.1M in corporate welfare from the state of Alaska in 2015.  The $5.1M was obtained from the State of Alaska’s online checkbook, and does not include GCI’s Terra project dollars which requires a state match (so I hear).  Ask your lawmakers about the Terra project.  Talk to your lawmakers about GCI, and the AFL-CIO camped outside their offices.   OMG, what is GCI going to do with themselves if Ron Duncan is unsuccessful in bullying lawmakers to take your PFD?  You got it.  GCI will be holding the unmatched bag.  Alaskans didn’t take the money, GCI did, and now GCI’s financial woes have now become ours.

Therefore, it is understandable that Ron Duncan would hire lobbyists, and bully, and threaten lawmakers to submit, or GCI will unseat them.   The pressure is on to abolish the PFD to keep the corporate welfare flowing right into special interests' pockets that includes GCI, and Ron Duncan is leading the charge.

Are you interested in taking the D out of PFD by tying your permanent fund check to an oil commodity?  Are you confident in an oil commodity that is volatile that requires the Trans Alaska Pipeline (TAPS) be the sole revenue generator for your PFD?  Especially, when TAPS is on the decline and increasing oil production is not a priority?

What Alaska needs is a Governor who will lead, and a Governor and legislature who will cut the budget to live within our means.  Not a Governor, or legislature advocating to reduce your PFD, and abolishing the PFD program as we know it.

Today is the day that will change Alaska forever, and it won't be about moving Alaska forward.

Posted by Deborah Brollini at 6:08 AM